Income inequalities affect more than just the economic status of the nation. There is “Growing evidence that countries with a bigger gap between rich and poor do more harm to the planet and its climate”, most unequal affluent countries contribute more to climate change through pollution than the less affluent, but more equal counterparts. Within most wealthy nations’ societies there is a common theme of heavy industrialization, consumerism, and thus planned obsolescence. Planned obsolescence is a concept where corporations create products that are designed to have a shorter lifespan, as to force the consumer to replace goods at a sooner date than otherwise necessary, sustaining company profits. In America for example, commercials, advertisements, and brands are everywhere, consumers want the newest and best trends of every season. Mass amounts of waste coincide with such a cultural standard. In contrast, countries who are lower on the economic affluence scale typically use products to the fullest intent, practicing resourcefulness. Below is an image displaying the vast inequality between the world population, and the coinciding emissions. 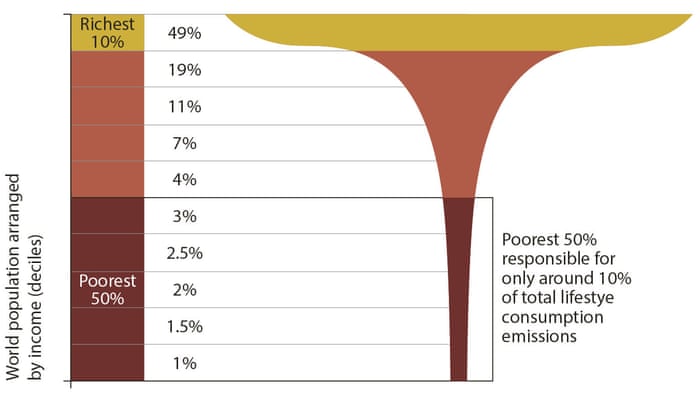 The environmental Kuznets Curve has been used to describe the relationship between environmental quality and per capita national income (economic growth), as shown below.

“It appears that income distribution rather than average levels of income may  be a critical determinant of environmental degradation”. (Jun et al., 2011).

Find out your ecological footprint! Click the link below:

The ecological footprint is a calculated estimation that allows users to become aware of their environmental impact, yet our civilization is in need of additional education and action in order to inspire political and environmental change within society. Most of Americas’ emissions have been produced through the expansion of our economy, but the earth can only take so much industrial growth. Currently Slovenia is using the Ecological footprint as a guideline to achieve their sustainability goals. I believe that the United States, especially since we are one of the most significant emitters, need to increase awareness and begin to apply the same changes within our society. Since our current president doesn’t believe in climate change, what are the next steps for environmentalists in the United States? Although the reduction of emissions in Slovenia is amazing, the ecological footprint is a global issue that requires collaboration on the local and national level.